The Shape of Data

Have you ever had an idea you couldn’t quite shake? Something that worms it’s way into your brain for one reason or another and just wont leave. Always on the backburner, thinking about it in the shower every day, in the bed as you go to sleep at night, zoning out in the living room, for as long as you can remember?

For me, that thing is the shape of data. Let me try to explain why:

Quickly grabbing a definition for “data”:

the quantities, characters, or symbols on which operations are performed by a computer, being stored and transmitted in the form of electrical signals and recorded on magnetic, optical, or mechanical recording media.

Before I lose you here with my emphatic excitement for the endless turmoil that is “data”, let’s zoom in on something more understandable to get our bearings. I’m going to talk about a common compression format (PKZip) for a bit because it touches on a lot of the topics that are relevant to the bigger picture.

How a ZIP File Format is Unpacked

When you try to open a .zip file on your computer a few things happen. There’s some calls behind the scenes that look at the file extension of example.zip and use your operating system (OS) to map it to a program that your computer has been told can open that file extension.

Your computer may have the popular “7-Zip” program assigned to handle .zip files, in which case a call will be made roughly as follows.

The “x” argument tells 7-Zip that the contents of zip archive should be extracted. So 7-Zip reads the first few bytes of the file to check if certain magic numbers (also called magic bytes, file signatures, file headers, etc…) for the values 50 4B 03 04 are present. These values in text format are PK␃␄, AKA the bytes that identify the start of the PKZip (Zip) archive file format.

Then 7-Zip will go through and attempt to extract out relevant information and sections of the data, decompress sections of data that represent other files, as well as the attributes of those files such as the filenames and timestamps.

Finally, you get your extracted files from the .zip file.

There’s a lot more to the process, but for our purposes we’re just gonna ignore it for the time being.

Now, let’s explicitly call out just a few of the things that were part of the above process that tried to make sure that your zip file opened correctly.

In fact, many of the file extensions you see every single day are actually PKZip file formats. To name a few:

You can even remove the file extension entirely and the file is still a valid PKZip file. A file extension simply exists to help map a file to a program that is most likely to be able to correctly parse it.

This is the first line item that actually deals with the contents of the file. If the bytes at the start of a file are 50 4B 03 04 then it matches the magic bytes for the PKZip file format. So let’s do exactly that, let’s put exactly those bytes in a file and see what happens.

We still get an error because magic numbers in a file do not necessarily mean that a file is anything at all. They may be there entirely by chance!

For example, we know that the magic numbers 50 4B 03 04 are 4 bytes. Each byte position can have 1 of 256 different possible values. This means that if you generated 4 completely random bytes, there would be a 1 in 183,181,376 chance that it would end up being the same magic numbers as the PKZip’s magic numbers. I know that seems like a really small chance, but consider that you generate a bunch of reports every day and you stamp the report with a integer number at the start of the file. When you hit report #67,324,752, you end up with the magic number of the PKZip file format.

Sure, I’ll concede the latter example is a stretch, but the point I’m trying to make is that it’s within the realm of possibilities.

Above, I discussed a file format PKZip to highlight some of the ways systems are structured to make it probable that a file format was able to be correctly parsed as well as call out some attributes that are exposed to the end-user that aren’t always part of the actual data. File formats are data, but not all data are file formats.

I mean file format in a traditional sense:

We’ve come so far in computing and optimized day-to-day operations we’ve become accustomed to the hooks and helpers that differentiate the data from the file format.

There’s nothing wrong with a file opening as expected! But if you suspend all assumptions and expectations, I believe that you will find a thing of beauty. A whole world of mystery and chance hidden just below the surface.

This is the data I want to tell you about.

The Inherent Attributes of Data

I hope this helped clarify some things 😋. Let’s dig in to the easiest one’s first with some examples.

The length may be zero in cases where, much like math, the concept of zero holds a place for nothing. If you save an empty text file on your computer, the data has nothing of value and zero length, but clearly still exists. It’s a tangible, real, thing you can double-click to open and reveal emptiness with no values or length.

The length may be undetermined and approach infinity in cases where the data is effectively an endless stream. A good example to really solidify this concept is Cosmic Microwave Background Radiation (CMBR). CMBR is an ever-present frequency that can be measured no matter where you are in the universe. The origin of this frequency is related the “Big Bang”. For all intents and purposes, it can be observed infinitely and definitely, definitely mean something.

Now we land on my favorite section of data:

The numbers mason, what do they mean?!?

Let’s take a look at this data, but by looking at it as little as possible. Actually, actively refuse to look at it directly unless absolutely necessary. No one knows what it means, but it’s provocative.

It has a defined length of 240 bytes. If you can read hex, you’ve probably already spotted some details, but let’s pretend that you can’t do that and refuse to look at the data from here on out okay?

How might you approach this block of 240 bytes of data?

First, let’s try to determine the entropy, or how random the data is by using an algorithm for calculating Shannon Entropy for which you can grab an implementation in almost any code language here. 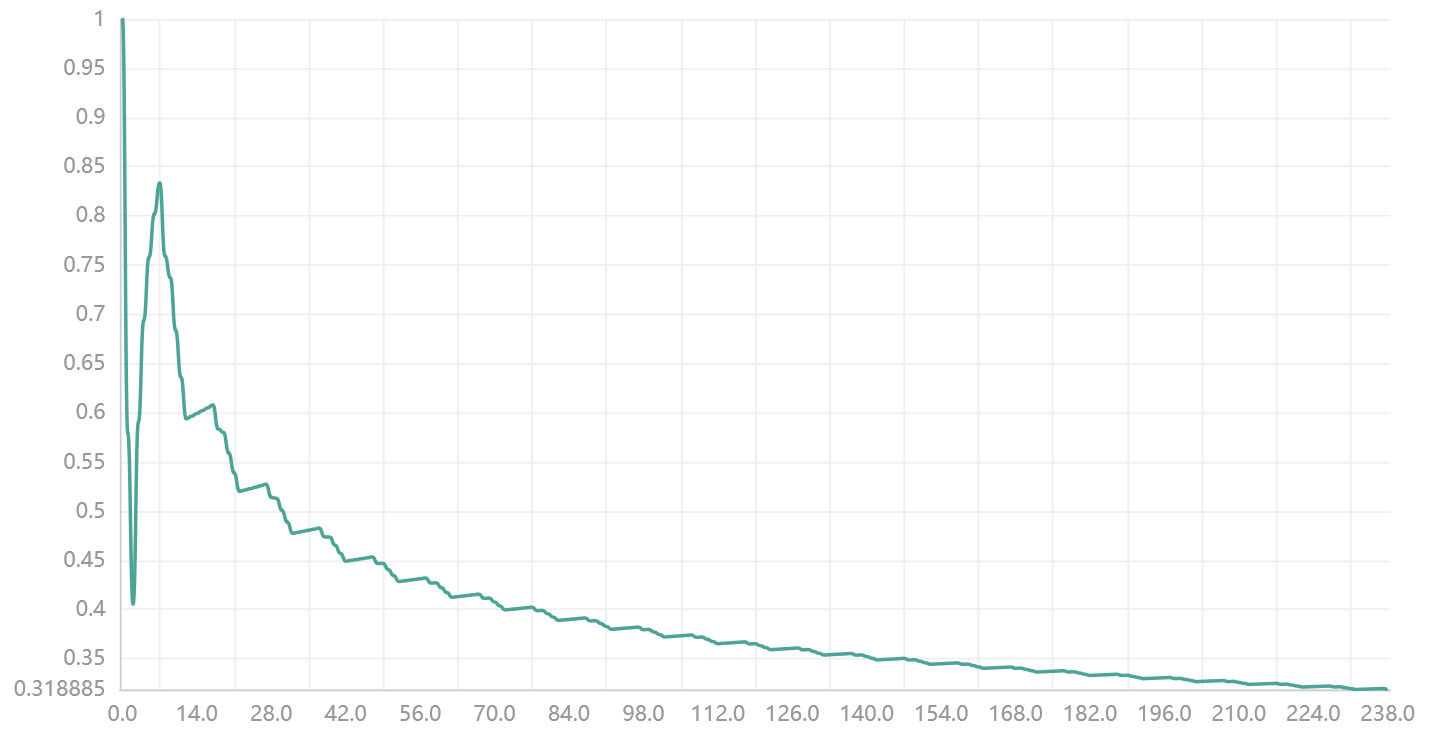 Reading this graph we can see that initially the values are more random than the “nothing” that exists before the data starts (resulting in the initial spike), then steadily decreases as more values are read from the data.

This may indicate that the data isn’t very random, potentially even repetitive.

An easily understandable example is Run-length Encoding (RLE) for which repetitive data can be encoded in a much denser format.

A RLE compressed representation of a screen containing black and white pixels may be represented as:

Circling back to zip files, let’s create a Zip archive (lossless compression) of our example data which produces…

The resulting Zip archive of our example data is only 170 bytes! And that’s including additional stuff like magic numers, timestamp, filename, etc…

This means that at minimum the lossless compression utility was able to encode 70 bytes of repetitive or patterned data in a more optimized format. This again, indicates that the data isn’t very random, potentially even repetitive.

To prove why this works, if I generate a 240 byte file with random values and try to compress it using the same utility it actually produces a Zip archive that is 402 bytes. The compressed random data is larger than the original, at least in part because it lacks any pattern to encode.

Now that we know that there is likely to be patterns or repetition in our data, how might we approach finding them?

We can use something called frequency analysis. The core concept of which is knowing that each byte can be a value of 0–>255, so we simply count how many occurrences we see of that byte value. Putting this frequency analysis in graph format: 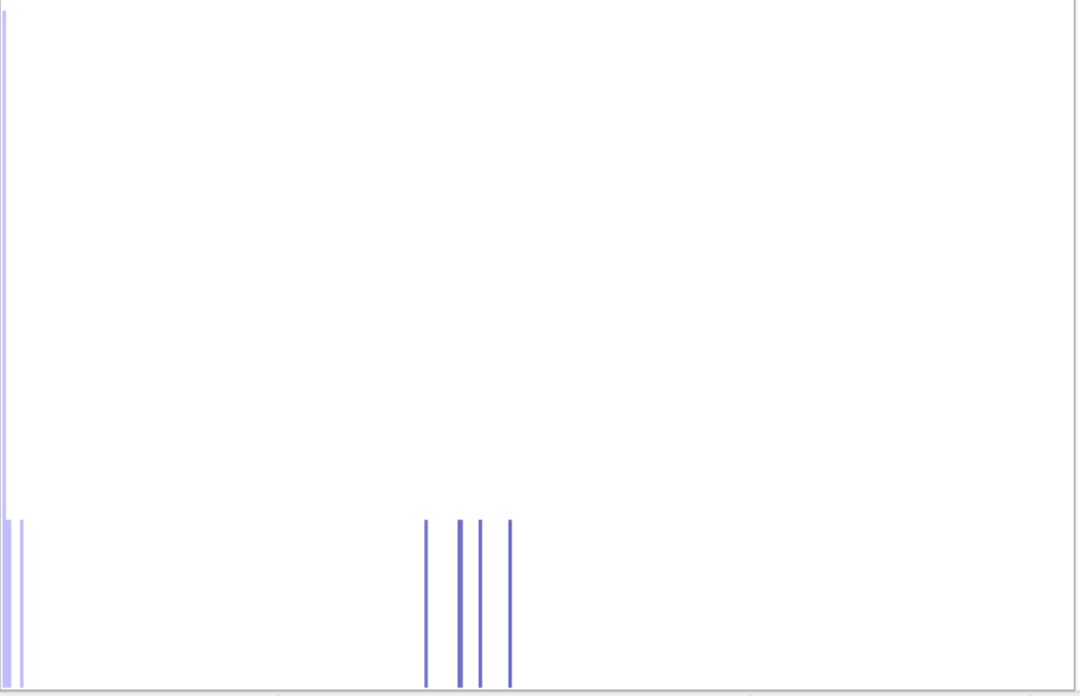 The X-Axis ranges from byte value 0–>255, while the Y-Axis represents how many times this value was seen in the data.

We see that the most common is 00 (Count 96), with the 6 others ranking equally (Count 24 Each). This may indicate to us that the 6 equally ranking values are part of the pattern, with 00 potentially being part of the pattern as well but occurring more frequently.

And so we finally have a theory as to the shape of the data:

Okay, it’s fine to look at the data now.

Now that we’ve identified a single segment of the pattern in the data, we can examine it separately.

In this case, the data is in a very common encoding Type-Length-Value (TLV) in which:

In a real world scenario we’d now know that the encoding is TLV and that 01 as the Type is a string and have gained a fairly good understanding of the data at hand without ever really needing to look directly at it.

So if you find yourself browsing Archive.org indexes of some Art major’s attempt to create a virtual interactive 3D world using a long deprecated Java plugin in Netscape at 2AM, just remember…

Don’t panic. Look at the shapes.