Where we last left off, I had done an initial reverse engineering pass of Windows Update Delivery Optimization see: DOing Harm. I got familiar with the protocol, how peer discovery works, etc… but mainly only looked at the first handshake as that was most interesting to me at the time.

This time let’s dig a little deeper: Taking a look at how many systems are running this service on the public internet, the protocol itself, and doing a bit of fuzzing.

How many systems on the internet are running this?

As a quick Shodan.io query will show, 4 IP’s have this port open and are running a service that will respond to Shodan’s scanner. 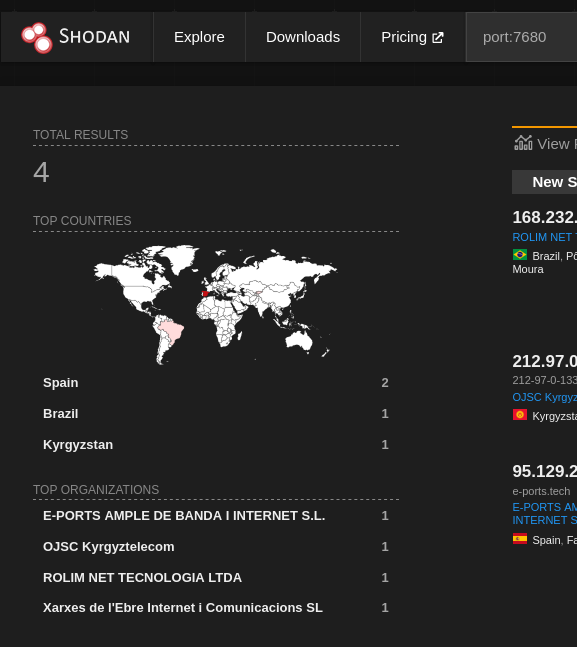 So let’s do an inventory ourselves!

I’m familiar with zmap which

With a 10gigE connection and PF_RING, ZMap can scan the IPv4 address space in 5 minutes.

Now, while it would be really cool to have my answer in 5 minutes, there’s a lot of reasons that unless you’ve worked with you upstream provider’s they would probably shut you down almost instantly.

A much more modest scan at 3Mbps is started and I forget about it for a while and just let it chug away.

We have a list of ~10k IP addresses with TCP port 7680 now. Let’s enrich them with rDNS information!

There’s a million tools for doing this, but I’m in a lazy mode so https://pkg.go.dev/net#LookupAddr handles it just fine in a quick little program.

Of these ~10k IP’s, we can do a check of how many of them resolved to a certain TLD with a query on the SQLite database I threw the results into. 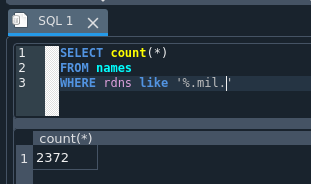 Here we can see that 2372 of these IP’s with port 7680 have a .mil rDNS entry. I’m not keen on the miniscule chance of explaining at a future date “I was simply pissing in your ports to see if it had Roblox installed” to anyone operating a .mil site. I’m just going to remove all of those IP’s from the list and pretend they don’t exist.

As mentioned in DOing Harm the following is a completely valid payload to ask the Windows Update Delivery Optimization (WUDO) service if it has the needed infohash for a copy of Roblox.

Also mentioned in the previous blog, I stated that if the above payload is sent only containing the first 31 bytes of the infohash WUDO will not close the connection. Upon sending the 32nd byte of the infohash, the WUDO service will close the connection. This behavior allows us to make a nice little service scanner to check whether the service listening on the port is actually WUDO.

And so… let’s fire it off! It’s not multi-threaded and has a default timeout of 3 seconds, so the current estimate says ~6 hours. This is fine because I’d like to have a beer and go read some documentation on 802.11 and WiFi-Direct specifications.

1245 is not a big number of IP’s to be running a service on the public internet, but it isn’t particularly small either. I wont’ lie that i was kind of hoping for a much larger number, but I expect that the number of hosts with this port open fluctuate a lot depending on the day.

Additionally, while I checked the public internet, it’s the Windows default that this service be available on LAN, so that’s still worth investigating.

I had intended to reverse the protocol as part of the previous blog, but life happens and I simply didn’t have the time (and that blog was getting rather lengthy). I told myself “I’ll do that for the next blog.”

Then, I recieved a direct message on Twitter from Paolo @pmontesel:

First we’ll review the Handshake, the same part of the protocol I spent the most time looking at in the previous blog. I’ll lay down relevant sections of the protcol alongside his notes (in block quotes).

According to Paolo’s notes:

The handshake packet is the only one that follows a different structure. It starts with a protocol “magic”:

This is followed by the 32 bytes of infohash / swarm hash which identifies the file requested for download from a peer.

I’m really glad Paolo figured this out because I was really confused by this.

And finally putting it all together:

Paolo lists several other types of messages including:

Honestly, Paolo has covered just about everything I was interested in reversing. At the top of his notes he lists:

TODO: Kaitai Struct of the protocol

I love Kaitai! I’ve used it in several of my previous blogs and it’s my preferred first step for laying out the structure of a binary stream. However, Paolo’s notes are wonderful and have given me a huge advantage. Writing a kaitai struct almost feels like cheating. I’ve never written a wireshark dissector before and I intend to fuzz the protocol, so that seems like a good route to go down.

While the internet-wide scan at the top of the blog was running, I reached out to a friend Yuu who was nice enough to drop a link to a repo he had of 2 Wireshark dissectors, one TCP and one UDP.

So, uh, I guess here we go? Disclaimer: I don’t know Lua.

Navigating the Wireshark dialog Help –> About Wireshark –> Folders shows where lua scripts are loaded from.

After some fiddling about and learning how to use the Wireshark debug console, most of my mistakes were due to not knowing how to write Lua, rather than difficulties with writing a dissector itself (Go figure).

I end up with the following basic dissector msdo.lua:

While this just dissects the first handshake, this is perfect to use with a fuzzer as typically (hopefully) bugs are found in the intial handshake. Bugs deeper within the protocol are usually a little harder to reach, so we’ll fill out the rest of the dissector if we don’t find anything interesting from just fuzzing the handshake.

In part 1 of the blog, I’d managed to crash the DoSvc easily several times by fuzzing on a VM running Windows 10 Stable 1809 with radamsa and running the fuzzer from a raspi.

I made some optimizations this time around:

Luckily my failure to reproduce a crash itself provided some clear direction to go in for next time (if there is a next time).

As fate would have it, Binary Golf Grand Prix 3 (BGGP3) was just announced. The theme this year is “crash”:

The goal of the 3rd Annual Binary Golf Grand Prix (BGGP3) is to find the smallest file which will crash a specific program.

With that, I’ll be wrapping up this edition of the blog and heading off to participate in BGGP3 which has structured rules and objectives, while dealing with the same tools and methodologies I’ll need if I’m to pursue MSDO further.

Hope you enjoyed the read